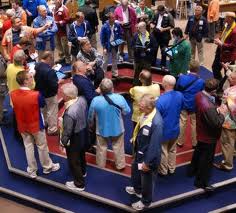 "Just think about it," said Chuck Rondoni, 54, a Chicago native who got a business degree three decades ago from Marquette University, "You couldn't open up a hot dog stand for the same price as getting into this business.

"Figure it out. For as little as $20,000 and a trading jacket you are in business for yourself, you have no employees and your overhead is next to zero," said Mr. Rondoni, a heavyset, bespectacled man who brings a passion to discussions of an institution he knows well - the MidAmerica Commodity Exchange.The MidAm is, in Mr. Rondoni's words, "an institution that offers great opportunities to make a good living yet remains one of Chicago's best-kept secrets," though it was established more than a century ago.

Indeed, the MidAmerica Exchange is woven tightly through the fabric of Chicago lore, but its history and identity remain obscure, partly because the futures industry always has been an enigma to most outsiders.

The MidAm also has been overshadowed by its two giant brothers, the Chicago Board of Trade and Chicago Mercantile Exchange.

In a converted members lounge on the fourth floor of the CBOT, the MidAm has been a training ground for some of Chicago's more successful traders who, as young men and women, sharpened their spurs in its nearly two dozen futures and options pits.

One of its most famous sons, Richard Dennis, who began trading soybean futures at the MidAm while a college student in the early 1970s, is said to have netted nearly $100 million when he left the CBOT grain pits two decades later.

"I have always felt that the MidAmerica, more than anything, offers an opportunity for young people to come into the market and to learn the basics of trading, to become familiar with the pits and open-outcry on a very cost- effective basis," said Hal T. Hansen, head of Cargill Investor Services and chairman of the Futures Industry Association.

Carmen J. Cerrone, a veteran order filler who began trading at the MidAm when it was on an upper floor of the Fisher Building 20 years ago, notes that the exchange is not just for those looking to cut their teeth. Many of its approximately 700 active members have found a permanent home there, he said.

"For those who want a challenge but don't want to trade the truly big- time, they can come here and find all the action they need," said Mr. Cerrone, co-chairman with Mr. Rondoni of the MidAm governing committee.

The MidAm and its predecessor, the Chicago Open Board of Trade, have made important trade-clearing contributions to the futures industry.

Before the turn of the century, the Chicago Open Board developed third- party clearing operations that have been copied by others, including the CBOT, which created the Board of Trade Clearing Corp.

Volume at the MidAm is about 350,000 contracts a month, a pittance compared with the CBOT, which on one day can trade more than 800,000 contracts.

But the MidAm has captured a market niche long ago overlooked by the Merc and the CBOT, which trade roughly half of all futures and options in the world.

The MidAm offers smaller products, known as odd-lot or mini-contracts, to speculators who lack the capital or spirit to buy or sell a CBOT U.S. Treasury contract, for example.

CBOT will shut door on MidAm

The MidAmerica Commodities Exchange--a small-scale Chicago futures mart that long served as a training ground for novice traders hoping to move up to the city's bigger exchanges--is being shut down amid dwindling volume.

The move reflects a worldwide trend toward electronic markets displacing the shouting and arm-waving of traditional open-outcry trading pits.

The Chicago Board of Trade, which has owned the 133-year-old MidAm since 1986, said Wednesday that it intends to "decommission" the tiny exchange within about a year.

The CBOT, which is transforming itself into a for-profit corporation from a member-owned governance structure, attributed the shutdown to economic forces. "The Board of Trade membership has been subsidizing the MidAm Exchange to the tune of several hundred thousand dollars a year," said CBOT spokesman Dave Prosperi. Exchange officials concluded "we needed a change," he said.
"Historically, the MidAm's been a training ground and springboard for many of the best-known traders" at Chicago's bigger exchanges, said Jacob Morowitz, president of the USA Trading division of Refco Inc. But for a number of reasons, he noted, over the past decade "the ability to move from MidAm to the Board of Trade has really diminished."

In line with its historical role as the home for lightly capitalized traders, the MidAm deals in so-called "odd-lot" or "mini-contract" products that are smaller--and thus less costly to trade--than the financial and agricultural futures at the bigger CBOT and Chicago Mercantile Exchange.

The CBOT's soybean contract covers 5,000 bushels, for example, while the MidAm deals in 1,000-bushel contracts.

In announcing the end of MidAm trading, CBOT officials said Wednesday they intend to convert eight of the MidAm exchange's most active contracts into CBOT "mini" contracts.
Separately, the Board of Trade disclosed that it is planning a similar "mini" version of its Dow Jones industrial average stock-index futures.

The move is reminiscent of the Merc's decision several years ago to offer electronic "mini" versions of some of its financial futures contracts.

The MidAm contracts will trade exclusively on the a/c/e all-electronic trading platform, which the CBOT operates jointly with the Germany-based Eurex exchange.

"Decommissioning the MidAm was not an easy decision, as we have many members who began their trading careers at that exchange," Board of Trade Chairman Nickolas Neubauer told CBOT members Wednesday. But "times have changed," he said, and the MidAm contracts being converted will fare better under the CBOT brand.

Founded in 1868, the soon-to-be-shuttered exchange was previously known as the Chicago Open Board of Trade, but adopted its current name in the 1970s. In the `70s and early `80s, the same factors that spurred surging growth at Chicago's bigger exchanges helped the MidAm enjoy a solid, if smaller-scale, expansion in trading volume. But when volume later began to slip, the MidAm ran into economic problems and agreed to be acquired by the CBOT.

Volume has continued to weaken. Last month, only about 50,513 contracts traded on the MidAm, roughly one-quarter of the volume in the year-earlier month. Although the MidAm once operated several trading pits, all of its contracts are now being traded in one pit, noted spokesman Prosperi. "I was over there earlier today, and only about twenty people were there," he said on Wednesday.

Although MidAm seats have traded as high as $15,000, and fetched several thousand dollars just a few years ago, the most recent seat sale for the exchange drew just $1,200 earlier this month.

When more customer orders were flowing at the MidAm, "the rules you had to learn and the abilities you needed were the same ones you needed" in bigger markets, said USA Trading's Morowitz.

Of that group, the financial contracts are set to begin trading on CBOT's a/c/e platform Sept. 30.

The mini-contracts for agricultural and metal products are slated to come later, pending resolution of ongoing negotiations between the CBOT and the Chicago Board Options Exchange regarding a trading-rights dispute.

MidAm seat holders as of Sept. 1 will be granted temporary CBOT membership privileges, which will enable them to trade the converted mini-contracts until year-end 2002.