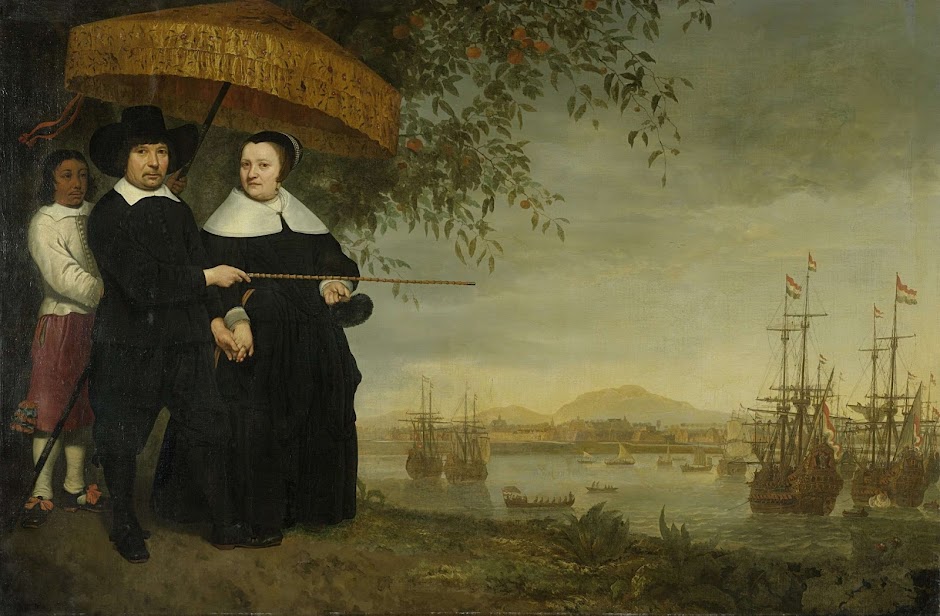 Jacob Mathiuesen and his wife along with a fleet of trading ships in the background.

Founded in 1602, the Dutch East India Company (Verenigde Oost-Indische Compagnie or VOC) flourished and survived for two centuries. The company, a combination of commercial organisations in various cities of Holland and Zeeland, traded both in Asia and between Asia and Europe. It was the first public company to issue negotiable shares and it developed into one of the biggest and most powerful trading and shipping concerns. The VOC ran its own shipyards, the largest being in Amsterdam. This spectacular trade with Asia made the Dutch Republic the world’s key commercial hub.

In Asia, the Dutch East India Company (VOC) built up a network of hundreds of bases: from simple offices and warehouses to massive commercial bulwarks. At the heart of the VOC’s Asian operation was Batavia (Jakarta) on Java. Batavia was established in 1619, when Jan Pietersz Coen captured the port of Jacatra. He had a huge fort built on the site (Batavia Castle) with workshops, warehouses and residences for company staff. Around this a city grew which was in turn surrounded by a perimeter wall. The fort was also the home of the governor general, the highest VOC official in the East Indies. He chaired the Council of the Indies, the executive committee that took the decisions in the East Indies.

Following the establishment of the Dutch East India Company (VOC), two or three fleets would sail each year from the Dutch Republic to Asia. Bigger ships were built for the voyage, to carry more people and more produce. It generally took eight months to reach the East Indies. An average of seven knots (13 kilometres per hour) was considered a good speed. Along the route, the VOC set up trading posts where ships could take on provisions for the next stage. Between 1602 and 1610, 8,500 people sailed to the East. The numbers soon rose: in the 17th century an average of 4,000 people sailed to East Asia each year; and in the 18th century even more. Eastindiamen could carry hundreds of passengers. The ship’s company of sailors and soldiers slept tightly packed between decks, where it was close and foul. No thought was given to hygiene. Officers, the captain and passengers occupied cabins on the quarterdeck. Discipline was severe on board. It had to be. Sailing to Asia was a dangerous undertaking, and often difficult as well as tedious.

For the long voyage to Asia and back the Dutch East India Company (VOC) built special ships. These were a combination of cargo and battleship: sturdy and with a large hold for produce, as well as provisions and ammunition. The wood and ropes suffered wear and tear on the voyage too. At the shipyard in Batavia the ships were overhauled - careened and cleaned - to ensure they were in suitable condition for the voyage home.

In 1604, the Dutch East India Company (VOC) began trading in India. Along the coast from Surat to Calcutta, VOC factories and warehouses covered a far larger area than the company controlled in the East Indies archipelago. It was from the islands that the VOC obtained most of its spices: salt, pepper, nutmeg, cloves and cinnamon. India provided an ample supply of fabrics: silk and cotton. The finely decorated chintz (cotton) was especially popular in Europe, as was silk. Bengal opium was traded – in small quantities – on Java and occasionally in Europe. It was smoked as a recreational drug. Japanese produce included gold, silver, copper and porcelain. In Japan there was considerable demand for Indian silk. Silk, porcelain and tea were also traded in China. For a while, the VOC even traded in elephants in Asia. They were exported by the VOC from Ceylon (Sri Lanka).

For two-and-a-half centuries, the Dutch were the only Europeans permitted to trade in Japan. And even there they were confined to a small artificial island in the bay of Nagasaki: Deshima. Europeans were barred from entering Japan; and the Japanese from leaving. However, once a year, a small Dutch delegation would make its way to Tokyo to thank the shogun for the privileged position that the Dutch enjoyed – and to present gifts of course.
Goods were transported across a bridge connecting Deshima with the city and this was how the Dutch learned about Japanese culture. Among the Japanese it gradually became evident that there as a world out there. A world in which discoveries were made, and progress, while Japan stood still. Dutch atlases and globes were a particular source of fascination in Japan. For the rest, the Dutch were considered uncivilised and especially ill-mannered at table.